Slaves were brought into the county as early as 1775, and the percentage of slaves in the total population increased substantially during the first half of the nineteenth century. Slaves, like land, were considered property, a source of labor, and a sign of wealth. By 1850 blacks constituted approximately 34% of the county's total population, with the largest numbers in Richmond and Kirksville. Few Madison County slaveowners before the Civil War followed the example of emancipationist Cassius M. Clay and freed their slaves. Contrary to the sentiments of the majority of people in the county, the small community of Berea, led by the Reverend John G. Fee and John A.R. Rogers and his wife Elizabeth, strongly promoted antislavery activities. 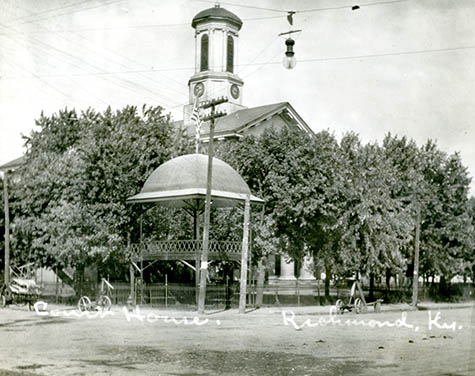 The relative social status of blacks and whites in Madison County remained virtually unchanged after the abolition of slavery, although blacks were allowed to vote for the first time in 1866. After emancipation, Madison County blacks experienced the greatest opportunities for advancement in Berea. Because of segregation and restricted job opportunities, they tended to have a lower standard of living and a higher death rate than whites; consequently, many of them migrated out to the area during the latter part of the nineteenth century and the early decades of the twentieth century.

Influential black leaders in Madison County such as the Reverend Madison Campbell (1823- 1896), a former slave, the Reverend H. Dunson (1816-1893), and educator/poet Henry Allen Laine (1870-1955) used their powers of communication to ameliorate racial tensions and help the plight of their people. The rural and city churches and the Colored Chautauqua organized by Laine served as the major forms of social and cultural activities for blacks. Health and educational conditions have improved in recent years for blacks who now comprise approximately 6% of the total population.