Early schools of the small, private, or "subscription," type operated under primitive conditions with inadequate supplies. Tuition was often paid in agricultural produce such as tobacco, which was considered legal tender. Some school buildings were used also as church houses. Even after public education was established in 1830, private academies flourished, patronized by wealthier families who scorned the public or so-called "pauper" schools. 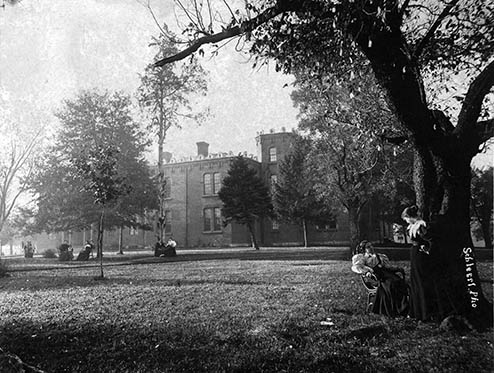 One private academy is particularly noteworthy: Madison Female Institute. When it was incorporated in 1858, a large brick residence located on a hilltop south of downtown Richmond was enlarged to accommodate the school, and ten acres were divided into lawns, gardens, and tennis courts. Following the Civil War Battle of Richmond in August 1862, the building served briefly as a Union army hospital where teachers and students helped care for the wounded. Madison Female Institute attracted students from all over the South and became famous as a finishing school. The property was leased in 1919 to the City Board of Education for ninety-nine years; today, it is the location of Madison Middle School.