Transportation has been a major concern of the people of Madison County since the settlement period. At first, the Kentucky River and the navigable streams were primary routes. In fact, the river served as the major transportation route for agricultural produce including tobacco, hemp and whiskey to market in New Orleans as early as the 1780's and continued well into the nineteenth century. 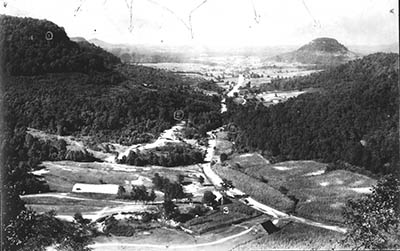 The only overland routes providing access to the area in the early history of the county were the Boone Trace, buffalo traces, and pathways alongside creek banks. Many were suitable only for pack animals.  By authority from the County Court, roads and bridges were constructed and improved during the 1800's. Roads were generally maintained by individuals or groups as directed by the County Court during those times.  New roads, such as Barne's Mill Road, Goggins Lane, and Hagan's Mill Road, were given the names of the county magistrates who requested the construction to provide access to their property or mill sites.  Many private toll road companies constructed gravel roads called "macadam" to improve road conditions during the mid to late nineteenth century. Toll gates and houses were erected every five miles to collect money to pay for the construction and operation of these improved roads. Only one state-owned turnpike, the Lexington-Richmond Pike, operated in 1852. 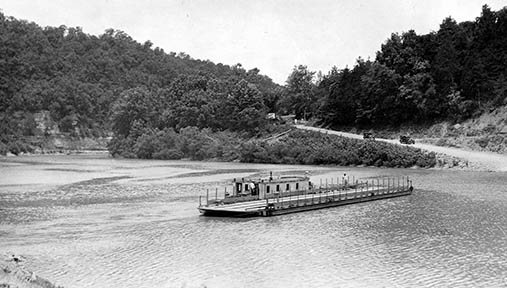 Ferry rights at the Kentucky River were granted in 1779 to Colonel Richard Calloway, one of the original settlers of Boonesborough. Other ferries were soon established, so that fifteen operated in the county by the 1840's. Ferries continued in several locations on the Kentucky River in Madison County until early to mid 20th century, at which time the Valley View Ferry became the only one left in the county.  Additionally, fording of the Kentucky River was possible at shallow areas in low flow periods prior to the installation of the locks and dams. 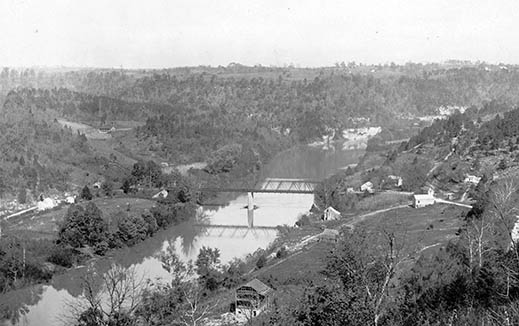 Bridges gradually replaced ferries during the nineteenth century. Internally, two new bridges on the Lancaster Pike--one across Paint Lick between Madison and Garrard Counties and one over Silver Creek--were constructed in 1857 to improve accessiblity.  A wood and steel bridge was built in 1870 over the Kentucky River at Green Clay's ferry landing to serve the Lexington-Richmond turnpike, later U. S. 25.  In 1946 this bridge, called Clay's Ferry Bridge, was superseded by a high, reinforced concrete bridge which later became the northbound lane of Interstate 75. In 1994 the bridge was widened into six lanes for I-75.  At Boonesborough, the Memorial Bridge was built in 1931 to replace the long serving ferry at that location.

Although stage coach lines, running on narrow dirt roads, linked Madison with neighboring counties from the 1840's until the early twentieth century, their utility and popularity ended with the advent of the railroad. During the last century, several railroad lines were in the county, one of which, the Louisville and Nashville Railroad, served as a major North-South line between Cincinnati, Ohio, and Atlanta, Georgia. Railroads connected the established towns and allowed for the development and growth of settlements along their routes. 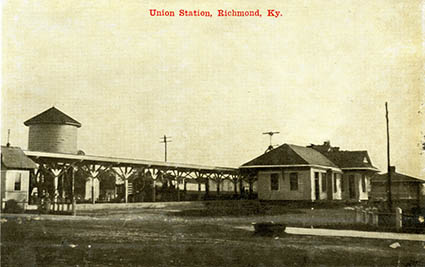 In 1868, the first rail service, owned by the Kentucky Central RR, ran from the L & N main line at Rowland (near Stanford) through Paint Lick, Silver Creek and then into Richmond to provide both passenger and freight services.  In 1888, another railroad was constructed from Nicholasville to Valley View and into Richmond.  It then continured eastward to Irvine and Beattyville with the primary purpose to haul timber and coad from that area.  it is still known by its nickname, the RINEY-B.  (Richmond, Irvine, Nicholasville, and Beattyville)  In 1884-85, the L & N linked its main line in southern Rockcastle County through Madison County to Winchester, thus providing daily, direct full train services to Richmond and Berea.   Richmond and Berea both experienced considerable growth due to their accessibility by rail. Warehouses were built along the tracks, with both Richmond and Berea constructing freight depots.

The Louisville and Nashville and Louisville and Atlantic (L & A bought the RINEY-B) railroads intersected in Richmond in 1900, each with its own passenger depot.  Mule-drawn street cars, buggies, or wagons carried travelers from either of the two depots to any one of a number of hotels.  Railroads flourished until the Great Depression of the 1930's, when automobiles and trucks began to supplant them. In the early 1930's, both of the supplemental rail lines in Madison county were shut down. The only railroad line that remains today, the Louisville and Nashville (now owned by CSX Railroad), terminated its passenger service in 1968, but continues full cargo services.  The majority of the trians are through flow with some local freight deliveries and pickups at sidings to factories and at the Bluegrass Army Depot.