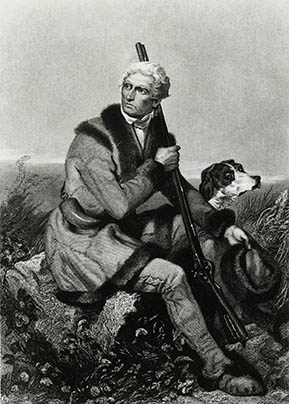 The first white men to enter Madison County's area were probably professional Indian trader John Findley, Daniel Boone, and four companions who came into the region in 1769 on a hunting and exploring expedition. The following year Boone's brother Squire went back to North Carolina to replenish supplies, leaving Daniel to explore as far as the Falls of the Ohio at present-day Louisville. In July Squire Boone communicated his return to Kentucky to Daniel by carving "1770 Squire Boone" on a prominent rock in the southern section of the area that became Madison County, near a campsite they had previously made. Now famous, Squire Boone's rock is displayed today inside the Madison County Courthouse.

In 1774 a group of five adventurers led by Judge Richard Henderson of North Carolina formed the Transylvania Company to obtain land west of the Appalachians from the Indians. Henderson successfully purchased from the Cherokee nearly 20,000,000 acres of land including present-day Madison County. Daniel Boone was employed by the company in 1775 to cut a trail into the land through the Cumberland Gap and to establish a settlement on the south bank of the Kentucky River.

Boone and his crew of thirty men marked a path that would become known as the Wilderness Trace (later called Road). Originally only a bridle path that wound through the county's north-south axis, it provided access to settlers from Virginia and North Carolina via the Cumberland Gap. Remnants of it still exist in Madison County near U.S. 25 South and Red House Road (KY 388). When Indians attacked them near the present-day Bluegrass Army Depot in Madison County, Captain John Twetty fell mortally wounded. The party hastily constructed a small, palisaded log enclosure about six feet high to repulse their attackers. This temporary fortification, called Twetty's Fort after the man whose burial place lay inside, is considered to have been the first fort erected in Kentucky. 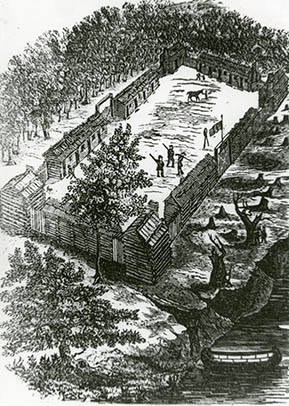 Pressing on, the men reached the Kentucky River and built another small fort near the mouth of Otter Creek. When Richard Henderson arrived in April with about forty settlers, he directed the construction of a larger fortification nearby. Called Fort Boone, it consisted of approximately twenty-six single-room, one-story log structures joined by a stockade wall having two-story blockhouses at each of the four corners. Thus guarded by the fort, the Wilderness Road became safer for settlers.

In 1775, the Continental Congress, meeting in Philadelphia, refused to recognize the existence of the Transylvania Colony. The following year the state of Virginia created Kentucky County, which included the area now occupied by Madison County, out of a portion of Fincastle County. Having a town plat of twenty acres divided into 119 lots, streets, and a common area, in 1779 Boonesborough (originally spelled Boonsborough) became the first town in Kentucky County to be chartered by Virginia. Kentucky County was divided into three counties in 1780-- Jefferson, Fayette, and Lincoln--with the area comprising today's Madison County being a part of Lincoln County.