Formal town planning has played a limited role in Madison County due to the county's rural nature. Most of the small communities developed along creeks, on railroad lines, as crossroads hamlets, or as small industrial towns.

Although many of the county's early settlements were abandoned as changing conditions made their locations disadvantageous, some towns, such as Paint Lick, succeeded in adapting. Paint Lick was settled in the 1770's on both sides of the Paint Lick Creek, where an early trail crossed the creek. Its name reputedly derived from settlers' descriptions of the peeled tree trunks that served as Indians' means of marking the salt licks along the creek. In the late 1860's a branch of the Louisville and Nashville Railroad, the first railroad in the county, operated from Stanford, Kentucky, to Richmond, passing through Paint Lick. The arrangement and sort of buildings in Paint Lick today are indicative of the revitalization brought to the community by the railroad.

Many early communities arose at the intersection of roads. Crooksville, one of these crossroad hamlets, was the village home of Major John Crooke, a well-known teacher and surveyor, who came to Madison County in 1789 and served as the second county surveyor for fifty-two years. He also taught school in his home, and many young men studied surveying under him.

The Kirksville community became a viable crossroads township during the 1840's. It was originally known as Bagdad and later called Centerville because of its equidistant location between Silver and Paint Lick Creeks and its almost equidistant location between Richmond and Lancaster in Garrard County. Samuel Kirkendall opened a general store and a carding factory there in the 1830's, and fellow residents honored the distinguished merchant by renaming the town Kirksville in 1845. By that time the community also boasted a church, a small school, a blacksmith shop, and a harness shop.

Other communities developed around industrial or manufacturing concerns. Bybee village grew around the Bybee pottery that was established in the first half of the nineteenth century by the Cornelison family. Nearby Waco also developed into a rural industrial town around 1843 because of the pottery industry. In 1847 it was named for Waco, Texas, and during the Civil War was the scene of a raid on Union sympathizers by some of John Hurt Morgan's Confederate Cavalry. The town served the Louisville and Atlantic Railroad around 1900 and saw much activity because of the railroad. College Hill is located north of Waco and was named for Texas Seminary, a small, private secondary school established there in 1868. The short-lived school changed its name to College Hill Seminary after the town of College Hill incorporated in 1873.

After the advent of the railroad, the Red House community, perhaps named for a prominent house of that color, became a thriving trade center and one of the many L&N Railroad stops in Madison County. By the 1880's Red House had grown enough to receive its own post office. The town of Baldwin, named for a local landowning family, experienced a similar growth and obtained a post office in 1890.

At the mouth of Tates Creek on the Kentucky River lies Valley View, named in 1890 for its picturesque vista of the river valley and hills beyond. The town was a flourishing lumber-producing community by 1900 and boasted a population of more than 1,000 inhabitants. The Three Forks Railroad, also called the "Riney-B" (Richmond, Nicholasville, Irvine, and Beattyville), entered Madison County at Valley View, traversing the river just west of the Valley View ferry crossing. Today, only the railroad bridge's iron cylinders filled with masonary and concrete piers remain, while the still-operating Valley View Ferry celebrated its bicentennial in 1985. 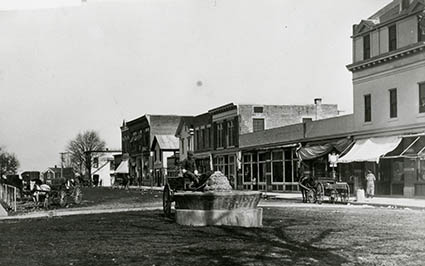 When Berea College and community leaders returned after the Civil War, postal service was re-established at a blacksmith shop about a mile north of Berea. In 1882 Berea became a rail station on the Kentucky Central Railroad, later the L&N.

Although the community of Berea grew around the school, it did not incorporate until 1890. One of its first ordinances was the establishment of a license fee to be paid by craftsmen and peddlers who ran booths and vended their goods from wagons, especially during the annual college commencement day fair. This heritage of craft production and merchandising has continued throughout the years to make Berea a national crafts center today.

In the first decades of the twentieth century the major function of the town of Berea was to serve the college. Boone Tavern on the edge of the college campus provided modest lodging for travelers on Dixie Highway (U.S. 25). A hotel, restaurant, and a store operated near the passenger depot to accommodate rail travelers. The college provided most of the employment in the town, operating the utilities, a hospital, schools, and a newspaper. Gradually, the college's influence on the town lessened, and a growing industrial base developed. By the early 1980's Berea had more industrial jobs than Richmond, a city three times its size.